High fidelity CFD tools and methodology are needed in order to predict aerodynamic and thermal effects on spacecraft vehicles to support the design and analysis of systems for planetary exploration as well as for earth return missions that use the Crew Exploration Vehicle (CEV). These tools are critical for designing the thermal protection system for rigid aeroshells, which may involve both ablating and non-ablating materials and for assessing the impact of a reaction control system (RCS) on aerodynamics and heating.

CRAFT Tech has developed a hybrid continuum/DSMC methodology to enable accurate predictions of aerodynamic and aerothermodynamic behavior when rarefaction effects are important. The computational model includes thermal and chemical non-equilibrium, ablation effects and the ability to model unsteady flow phenomena.

A unique Automatic Efficient Generalized Interface Surface (AEGIS) toolkit has been developed for interfacing separate continuum and rarefied non-continuum regions along a “continuum breakdown surface”. The tool has been developed for realistic and often complex, 3D spacecraft configurations, such as the interaction of the RCS plume with the wake, which is complex but necessary to predict the aerodynamics and heating. A continuum model provides the plume properties which are used as input to the rarefied flow solver for the plume/wake interaction.  The hybrid method supports multiple interface surfaces.  Thus, multiple plumes of various sizes can be simulated using CFD and their interaction can be treated using DSMC.

A demonstration of the hybrid coupling methodology is presented here for the Apollo command module geometry at altitude and flight conditions representing the Apollo-6 unmanned test flight. The relevance of such a simulation is directly linked to the current Crew Exploration Vehicle (CEV). The results demonstrate that a hybrid approach based on the AEGIS toolkit methodology is viable and that it can provide improved accuracy by capturing the localized rarefaction effects in the wake while requiring significantly less computational resources than a full DSMC solution of the complete problem. 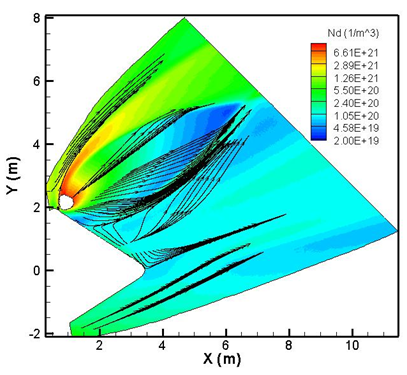